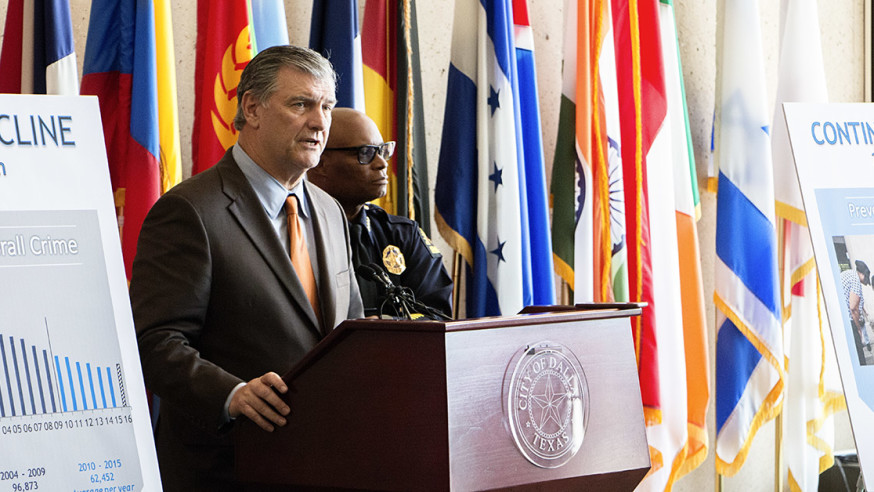 Asserting that “we must adapt to a changing environment with a sense of urgency,” Police Chief David Brown on Thursday outlined the department’s strategy to deal with a spike in violent crime in the City of Dallas over the past year.

Flanked by Mayor Mike Rawlings, Chief Brown said bringing the crime rate down is “an evolving operational strategy” that will involve close collaboration with state and local officials.

“Criminals don’t recognize geographic borders, so the assistance we will get from state, federal and local law enforcement agencies will be very valuable,” Mayor Rawlings said. “Crime is not just one department’s issue or one person’s issue, everyone has to do their part. If you see something, say something. This is the time to step it up.”

State and local officials agree that the most effective collaboration will be on domestic violence and drug related warrants, along with gang enforcement. “We are strengthening our relationships with other law enforcement to fight crime,” Chief Brown said. Violent crime in Dallas increased 30 percent over the last year, driven largely by domestic violence and drug related crimes.

A total of 563 total Dallas Police Department staff are assigned to the crime reduction push, which includes improving response times by rotating officers from administrative, investigative and support to evening field patrol shifts. In early March, the Violent Crime Task Force also began working evening shifts and focusing more on violent offenders and high crime areas. A total of 163 officers were shifted to this schedule.

Fifty officers have been assigned to foot patrols through high crime areas and neighborhoods, including parks, trails and commercial areas to increase police visibility and prevent crime. A Property Crime Task Force began working day and evening shifts to focus on areas with high incidents of residential burglary, car burglary and auto theft.