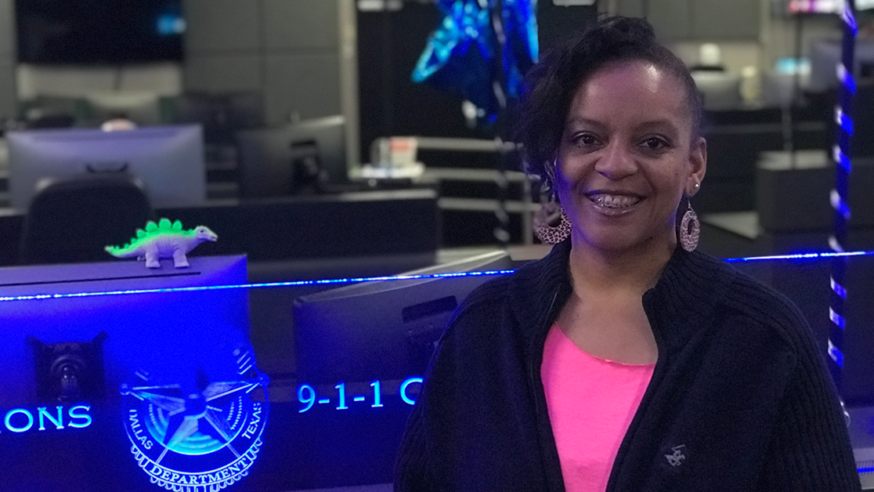 Rita Narcisse has been a Dallas 911 call taker for just over a year, and has handled countless emergencies. Previously working as a corporate call center trainer, she had an idea of what the job would be like – having police and military family members gave her insight into the stress she would experience as well.

Dallas had been experiencing heavy rainfall on February 20, and there were several swift-water rescues being handled by Dallas Fire-Rescue. Several vehicles had become stuck in high water, and their drivers needed to be rescued. One driver dialed 911 and reached Ms. Narcisse, who immediately began to gather information from the driver and calm her down. The driver originally was in her car as the floodwaters began to come up the windows; she then made her way to the roof of the vehicle as she waited for DFR personnel to arrive.

The situation was made more precarious as it was dark, and the first responders had to work out the logistics of both finding the driver, and then rescuing her. Ms. Narcisse stayed on the line with the driver for 30 minutes.

“I stayed on the line with her to keep her calm, and to keep track of the water,” Ms. Narcisse explained. She didn’t disconnect the call until she could hear DFR personnel in the background.

“Good calls are the ones with good outcomes,” Ms. Narcisse said. “This was a good call.”

In March, Ms. Narcisse was thanked by City Manager T.C. Broadnax and Assistant City Manager Jon Fortune for her actions on February 20 and Service First mentality.

22 minutes ago City of Dallas 0