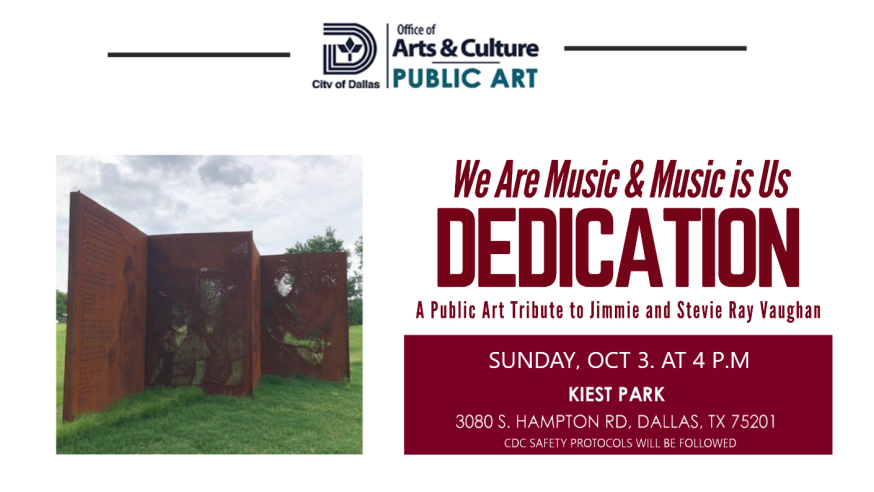 The City of Dallas will be honoring Dallas natives, the Vaughan Brothers, for their contributions to music. The public artwork will be on display at Kiest park, where it will pay homage to the Dallas natives, Jimmie and Stevie Ray Vaughan. The artwork entitled, We Are Music & Music is Us, celebrates the brothers Jimmie and Stevie Ray Vaughan and their influence in the music industry and in the history and culture of Dallas. Casto Solano, a Basque artist, created the art to pay tribute to the Vaughan brothers’ talents as significant innovators on the vanguard of blue’s music in the 1970s.

“The sculpture creates a place of belonging on which to forge our images together with theirs. A piece that will stand as a homage to two remarkable men,” Solano said.

Originally installed in March 2020, the piece will be officially dedicated by the Office of Arts and Culture and the Park and Recreation Department at 4 p.m. Sunday, Oct. 3 at Kiest Park, 3080 S. Hampton Rd. All Dallas residents are invited to come to celebrate the Vaughan Brothers and observe the 67th birthday of Stevie Ray Vaughan.

“We are so pleased to see this artwork that pays tribute to the contributions and accomplishments of the Vaughan Brothers in Kiest Park near where they grew up,” said Office of Arts and Culture Director, Jennifer Scripps. “It is the first public art to celebrate Dallas musicians.”

Jimmie and Stevie Ray Vaughan were born and grew up in Oak Cliff near where the sculpture stands. They started playing guitar as children, and by their mid-teens, they were professional musicians. Relocating to Austin in the 1970s, they formed individual bands that influenced the blues revival of the 1980s. Stevie Ray Vaughan died in 1990. The art sculpture was constructed from four COR-TEN or weathering steel-framed screens, formed by ribbons of cut metal. Panels measuring 10’ x 8’ each show imagery of the brothers’ lives and music including the lyrics to their well-known song, Tick-Tock. It stands near the trail crosswalk off the park’s main entrance.

“This is a wonderful recognition to these gifted brothers who grew up in Oak Cliff and transformed music worldwide. We are excited to spotlight this harmonious and energetic tribute to the Vaughan brothers in our park system,” said Director of Park and Recreation, John D. Jenkins.

Jimmie Vaughan and Kirby Warnock will also make remarks during a brief presentation and recognize the many donors who supported the work. Warnock, a documentary film writer, producer, and director, spearheaded fundraising activities for the art piece.

“I’m glad to see Dallas finally claim its rich musical heritage with the tribute to the Vaughan Brothers, and I hope it will continue by honoring its other artists,” said Warnock.

Warnock, is widely known for his documentary When Dallas Rocked, established The Vaughan Brothers Art Project to raise money to build and maintain the artwork. Individuals and foundation donations totaling $60,000 were received for the project with major donors including The Cabaniss Family Foundation, Jeffrey Stephen Davis, John and Lisa Dennis, The Kessler Theater, The North Texas Music Foundation, The Oak Cliff Foundation and Kirby Warnock.

To ensure the safety of all participants, CDC protocols will be followed at all times during the event.

For more information on the event visit: https://dallasculture.org/2021/09/kiest-park-dedication-ceremony/