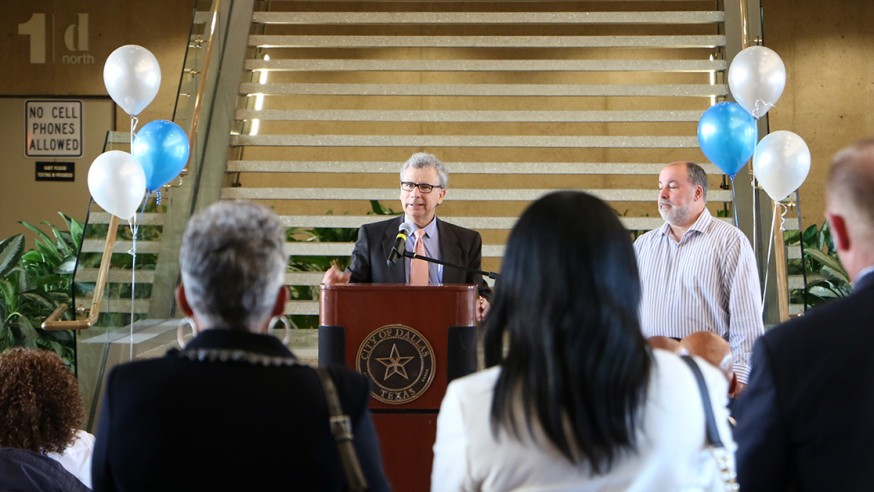 On January 20 1961, President John F. Kennedy made his inaugural address, urging Americans to participate in public service and to “Ask not what your country can do for you, ask what you can do for your country.” More than two decades later, formal, national recognition was given to public servants who choose a career of service.

Established in 1985, Public Service Recognition Week (PSRW) is celebrated annually during the first week of May. This week honors those who serve as federal, state, county, and local government employees. During this week, mayors, governors, city managers, and public service organizations have hosted recognition ceremonies and special events; issued proclamations; and highlighted the value of public service to their community. President Barack Obama issued this proclamation in honor of public servants. 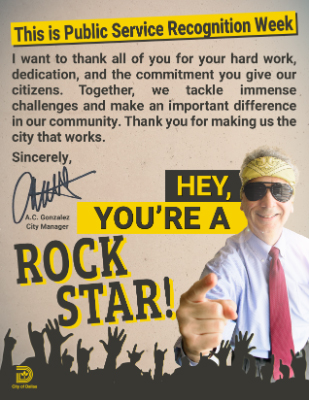 City Manager A.C. Gonzalez sent a letter of appreciation to city staff on May 2 thanking them for being Rock Stars and for making the City of Dallas a great place to live, work, and play. He encouraged everyone to recognize and thank their peers as fellow Rock Stars for their outstanding work throughout the week.

On Tuesday May 3, the Wall of Honor Recognition Ceremony at City Hall honored staff for going above and beyond their listed job duties to help citizens in need and those who demonstrated the 3 R’s of Dallas customer service: being respectful, responsive, and resourceful.

At the City Council Meeting on May 4, Mayor Mike Rawlings read a proclamation recognizing the commitment of City staff and for improving the lives of Dallas citizens. Mayor Rawlings noted that City staff exemplify the core tenets of effective public service.

To cap things off, staff gathered on the City Hall Plaza on May 5 to learn some new dance moves and watch their coworkers perform in a lip-sync challenge. City Manager A.C. Gonzalez and Mayor Pro Tem Monica Alonzo made appearances and demonstrated some fancy footwork with their own dance moves. They also took time to personally thank staff for their service to the public.

For more information of Public Service Recognition Week visit publicservicerecognitionweek.org. See photos from these events at twitter.com/CPEDallas. Art from the Dallas Water Utilities poster contest can be found on the Save Dallas Water website.