Members of Dallas Fire-Rescue (DFR) are trading their blue uniform shirts for pink t-shirts the entire month of October, part of a nationwide effort to raise awareness about breast cancer. DFR is joining fire departments across the country in the “Care Enough to Wear Pink” campaign to show support for individuals who have battled, or are currently battling this deadly disease.

Breast cancer can happen to anyone, including brave, selfless, DFR professionals. Shanetra Brown-Armstrong, a 10-year Senior Fire Prevention Officer never thought it would happen to her. Brown-Armstrong is a two-time breast cancer survivor and DFR’s campaign coordinator. 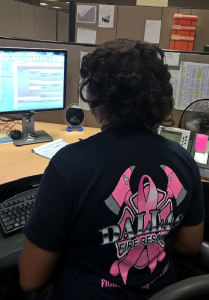 “Living with breast cancer has been a blessing and a curse,” said Brown-Armstrong. “When you have been diagnosed with an illness that has the potential to kill you, you realize how fleeting life can be. The things that I would take for granted, I no longer take for granted.”

Breast cancer is the second most common cancer among women in the United States. But millions of women are surviving the disease thanks in part to early detection, improvements in treatment and the support of friends, family and coworkers.

“The City and DFR have been very supportive of the campaign and it shows the members of the department and the citizens of Dallas that we care and that we stand and fight with them,” said Brown-Armstrong.

The official DFR “pink” t-shirt can be purchased for $20, and a portion of the sales will be donated to the Susan G. Komen Foundation on behalf of the men and women of DFR. DFR hopes to raise $10,000 for the Foundation during this year’s campaign.