Stanley Wilson applied for a job with the Dallas Fire-Rescue (DFR) on a dare. That dare would soon became Wilson’s reality for the next 28 years.

Stanley Wilson loved God, his wife Jenny, his two sons, Noah and Luke and his firefighter and Station 53 brethren. Wilson spent 28 years in serve to the residents of Dallas as a firefighter, though he would quick to tell anyone that his primary duties were as a husband and father.

Wilson was a fireman’s firefighter, a true servant, who continually gave of himself for the benefit of others. He answered his final alarm courageously doing what he did so often–giving all he had to save the lives of others. On May 20, 2013, Stanley Wilson became the 69th DFR member to give his life on duty while helping extinguish a six-alarm fire at the Hearthwood Condominiums on Abrams Road.

Stanley Wilson was born August 18, 1961, in Dallas to Nell and Jess Wilson. After receiving his degree in business administration from the University of Texas in Austin, he joined DFR in February 1985. Wilson had a tremendous heart for serving others, which was demonstrated in the time he spent with church activities, as quartermaster of Boy Scout Troop 890 and several mission trips to Mexico and the Rio Grande Valley. 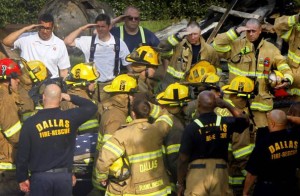 Thousands of firefighters joined hundreds of Boy Scouts, friends and family members in gathering to remember Wilson and his legacy of selfless service and dedication to others. After the funeral service, firefighters lifted Wilson’s casket onto a fire engine from his beloved Station 53 which took him to his final resting place, the Garden of Honor at Restland Memorial Park.

Dallas Fire-Rescue will hold a 2015 Memorial Service this Saturday, October 24, 2015 at 10:00 a.m. at 5000 Dolphin Road. This every five year event will honor fallen firefighters and their families.

To learn more about Dallas Fire-Rescue and review their incredible history, visit: http://www.dallasfirerescue.com/.